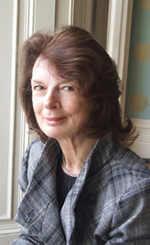 Gabrielle Wallace-O’Donnell is a member of the Society of Teachers of Speech and Drama, and holds a Licentiate from Trinity College London, and the London College of Music, and has a private practice in Limerick – The Gabrielle Wallace School of Speech & Drama.

Her students are prepared for Trinity/Guildhall London Examinations, and have competed successfully in Féile Luimní, Feis Maitiu Corcaigh, Feis Maitiu Dublin, and the National Children’s Theatre, and have taken part in the European Children’s Drama/Theatre Encounter.

Group Six Limerick was set up to provide past and senior students of the Gabrielle Wallace School of Speech and Drama with a vehicle to continue as group, and explore their craft.

A graduate of the Limerick School of Art, Gabrielle has worked as an art teacher at secondary level and has exhibited paintings in the Oireachteas Exhibition, Dublin, Winter Artist’s Limerick and also held exhibitions of her work in Dublin and Ennis; at The Bishops’ Palace, King’s Island, Limerick; The Georgian House, No.2 Pery Square, Limerick in November 2010; and most recently at No. 1 Pery Square Hotel & Spa, Georgian Quarter, Limerick, in April 2014.